Many who start out in Europeia find themselves on the Regional Message Board (RMB) on the NationStates website, commonly referred to as the "gameside." Sometimes, the platform is filled with creative roleplay, including engaging diplomatic endeavors and community-building among Europeia's residents. Ideally, the RMB should be a healthy, vibrant environment that encourages players to venture further into what Europeia offers, specifically the offsite forums where most of the region's activity occurs.

For the most part, however, the RMB is plagued with poor or spammy roleplay, disturbing roleplay of atrocities, and a lack of thorough moderation to enforce the rules and keep the discussion civil. Because of this, a debate ensued concerning Europeia's course of action to address the rampant problems troubling the RMB.

We first examined Forum Administrator Malashaan's thread regarding the moderation of the RMB. Many of the initial responses raised the issue of double-posting, poorly moderated roleplay, and the lack of a clear explanation of the RMB rules. Many of the solutions presented by the participants involved more proactive moderation and preliminary actions directed at newer players joining the RMB. Some have also offered more radical solutions to the issue, such as banning roleplay on the RMB entirely or integrating it into Europeia's Discord server.

Similarly, we've studied an (albeit unofficial) poll created by Spagtop with the question of "How can the regional message board be better moderated?". While some of the options were purely comedic, some responses can give an honest look at how its participants think the RMB can be better moderated. 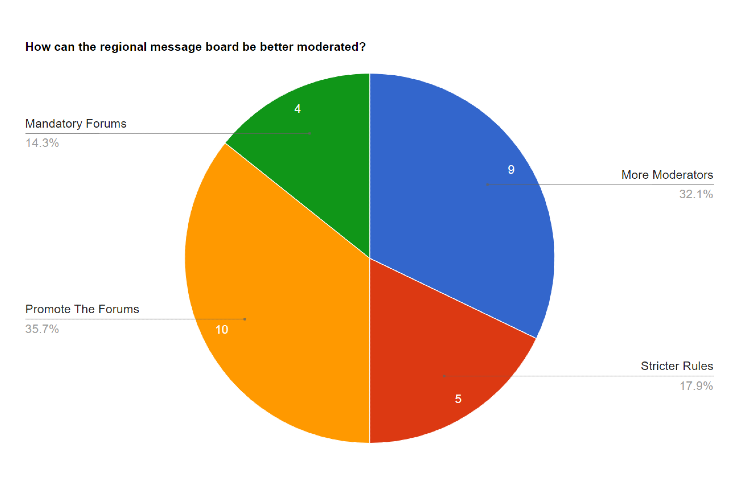 ​
As of July 12 at 9:11 GMT, promoting the forums and implementing more RMB moderators garnered the most individual votes. The poll's outcome is comparable to the responses to the thread started by Malashaan, concluding that most want better moderation and forum participation. At the same time, some wish for the forums to be mandatory entirely or for stricter rules to be introduced.

Finally, we've taken a more in-depth look at the different perspectives in the debate through an interview with two of its participants. We approached the current WA Delegate Le Libertie and former Delegate Prim for their contrasting opinions on the matter. We asked what they thought the biggest problems with the RMB are and what course of action they supported in trying to fix them.

Le Libertie emphasized the RMB's lack of visibility to citizens and its structural concerns that make it challenging to implement effective changes. For the most part, he says, the RMB was ignored by the citizenry, which was tolerated because of its idleness. However, the RMB then grew in activity, stressing the growing problems with the platform, most notably its subpar moderation relative to other Europeian platforms. In addition, the RMB faces natural structural concerns that other platforms do not encounter since the RMB is a single channel where a "flurry of activity" can drown out any unrelated content.

The current moderation tools, such as ejections, bans, and post suppressions, make moderation difficult and inflexible according to Le Libertie, especially for the small number of volunteers moderating the RMB. He believes that the RMB rules should be updated to accommodate the platform's unique mechanics and participants' behavior. The importance of said rules should also, in his view, be emphasized through the telegrams and the World Factbook Entry (WFE). Overall, he thinks that the region's approach to RMB moderation should be improved, especially the use of bans, where many concerns surface. A few of these questions address the length of bans, their severity, their scope, and even justification for removing nations for being puppets of banned nations.

Overall, the RMB is an integral outlet of Europeia, noting that it is essential to build an active, engaging community there which will inevitably be made up of people both interested and uninterested in the forums. Le Libertie's own journey on the forums is a testament to such, stating, "It wasn't Europeia's reputation as an elite political community, nor the impressiveness of the forums that drew me here. Rather, it was its beautiful WFE, the WAAP program, and its active RMB community that hooked me in." where the initial positive impressions left by the RMB led to his jump to the forums.

On the other hand, Prim emphasized how many of Europeia's more established citizens tend to not interact on the RMB at all, limiting the forum's understanding of the situation. It gradually improved over the years, however, as more citizens began actively using the RMB. But in 2020, after an influx of players from YouTube arrived, the platform started having issues with toxicity, harassment, and excessive behavioral issues. At that time, there was a new roleplay occurring on the platform, making it challenging to sort through productive discussions and those that were against the rules. According to Prim, the current roleplay is far more spammy and low quality than its predecessor, with discussions usually devolving into petty bickering and threats.

His solution is to install a stronger moderation team with more members, made up of citizens primarily from the forums or the Discord server, to monitor the roleplay on the RMB. Additionally, there should be a clear overhaul of the current rules for both conduct and roleplay limitations, which would serve as a good foundation for future moderation decisions and guidelines. Prim's ideal RMB moderation would also be stricter with rule-breakers, as some often come back as puppet nations either to create turmoil or interfere in roleplay.

In addition, Prim notes that RMB players often do not join the forums to become productive members of Europeia. This directly affects Europeia's influence on NationStates as a "niche" political and government forum simulation. Prim states, "We're more active on our forum than almost any other region I can name. We will not sustain that same pre-eminence in NS if we cannot continue to bring players onto the forum."

In conclusion, the debate surrounding the RMB's situation has seen numerous alternatives and solutions proposed. But as of the time of writing, the region's leaders have not yet decided on a final settlement.
Click to expand...

⚒ The First Republic of Greater Rubisland ⚒ · From British Columbia, Canada
What about me? You tell me, what's wrong with me?
Citizen

Cabinet
Deputy Minister
Citizen
Discord Moderator
This is a great recap and interview! Also congratulations on your first article!!

Citizen
Very nice to see this, I’ve missed most of the recent events surrounding rmb drama so this is a very good catch-up for me.
The disconnect between the rmb and the forums appears to have increased to me, and it’s a tough decision on what to do as previous measures haven’t been that successful.
My 2 cents are that forums are a much better resource for RP.

Cabinet
Deputy Minister
Citizen
This is an amazing first article for you to publish!! It's a really good recap of a current event for those who may not have been paying a great deal of attention to the discussion, while it also adds additional context/information to the discussion by including the two interviews from knowledgeable sources.