The low number of responses indicates apathy among the citizenry about the current Senate. That might be because the Senate has not passed any legislation (not counting treaties) since the Remand Amendment on June 26. Even among the people who did take the poll, the Senate does not fare well.

Senate satisfaction is down 5% since the midterm poll, and there are no positive comments on this Senate. Inactivity is mentioned in all of the comments, as well as the fact that a lot of legislation “dragged on” and was not finished.


Everything just dragged on
A bit inactive
Recently inactive, but I trust the inactivity wasn’t
It's has been quite a slow Senate and has been dogged by inactivity, it's discussed lots but not completed much. Overall I'm still happy with the slow work on legislation, it's just disappointing they never finished most of it up and it'll be up to the next Senate to finish a lot of this term's projects.
Speaker Lloenflys: 82.6% Satisfied

Speaker of the Senate Lloenflys has the highest satisfaction rating out of all current Senators. Comments noted that the speaker attempted to keep things chugging along, despite how “slow” the senate was perceived to be.


Did the best he could

Senator Gem scores the second lowest approval number for any sitting senator in this poll. Activity seems to be a major theme in the results for Senator Gem, which he also faced criticism for early in the senate term where he faced a recall effort against him.

When he contributes Gem's work is great, but too often he's inactive.
Senator McEntire: 47.8% Satisfied

Senator McEntire sits just above the overall satisfaction for the Senate itself, although he saw a 20% decline in his satisfaction numbers from the midterm poll. This goes along with comments the EBC received in regards to McEntire’s drop in activity after the midterm, although he was coined as a thoughtful discussion-starter.

Maybe not a standout star but he's contributed good discussion on the proposals and some technical help as well. Quietly but productively getting on with the job.
Senator Cove: 39.1% Satisfied (30.4% Neutral)

Cove receives an approval rating lower than 50% but still gets positive net approval because of the large share of neutral responses, much like in the midterm poll. Their activity levels are questioned once again, even though one of the three comments praises them for raising “valid points” when they were active.


just... very quiet, there were no highlights this term

Senator Gorundu’s approval is down 14% compared to the midterm poll. There is no clear explanation of this drop, and it is likely just caused by the drop in the number of people who took the poll. All comments about Gorundu are positive, and he is lauded for activity, raising good discussion points, and writing most of the legislation.


If there was a rating above very satisfied, I would be selecting it. One of the most considered and active senators in a long time, I hope they're coming back too

same as before - nice opinions and ideas and activity

Seems pretty active on the forums, I like most of his policies too

I've been happily surprised and impressed with Gorundu's performance. He raises good discussion points and he's been taking the lead on writing most of the legislation.
Senator Pichtonia: 21.7% Satisfied

Senator Pichtonia carries the lowest approval rating out of all of the current senators. He is the chair of the Intelligence Committee, and many senators on the campaign trail have lambasted a lack of a report on the happenings in the committee. Senator Pichtonia’s last comment in the senate was on July 19 on the Treaty of Par Vollen, underscoring comments surrounding his inactivity.


I forgot Pichtonia was a Senator!

this was a bad term all around.

Forgot he was still a senator, honestly.

Unfortunately Pichtonia has been very inactive in this Senate to the extend that sometimes I forget he's a Senator. I'm sure he would agree that this hasn't been a great term for him.
Senator Peeps: 69.5% Satisfied

Senator Peeps sports the same approval rating as Senator Gorundu. He was elected in the by-election on promises to improve the Frontier Act and start a discussion about reviving Arnhelm, the city-state that served as a training ground for legislators and was closed due to inactivity, this time as an institution that operates on the gameside (NationStates website). Peeps has accomplished both goals and been active, which is reflected in his approval rating and in the comments.

Came in with good ideas

I like his stance on reviving arnhelm. He also brings some new blood into the senste

He's contributed well since he joined the Senate and been active as well.
Senate Election

Who people want to see return

The majority of respondents want to see Lloenflys, Peeps, Gorundu, and McEntire return to the Senate, which corresponds to these senators getting the four highest approval ratings and suggests that every one of them would probably be re-elected if they chose to run. In fact, everyone but Lloenflys did declare their candidacy in the election, and according to the recent poll by EuroWeekly, will be comfortably re-elected. Senators Cove, Pichtonia, and Gem receive less than 50% of votes, which also reflects their approval ratings.

Who else people want to see run for Senate

Everyone! We desperately need more people to run.

Lime, Seva, John Laurens, Izzy, JayDee
There are a lot of suggestions as to who should run for Senate apart from the current senators, a total of 11 people suggested. Seva leads the pack with 4 people suggesting him, perhaps due to his time as a Senate Substitute for Cove last term. Pland Adanna, Izzy, and UPC, all former senators, each had 2 people mention their name. 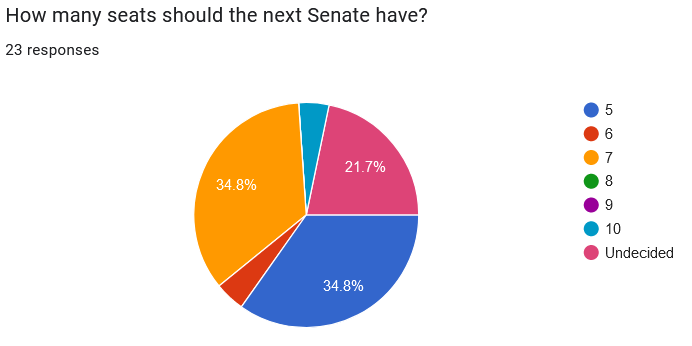 There was a tie between a 5 seat and a 7 seat Senate, which have been the most popular Senate sizes in recent history. However, a large share of respondents were undecided, reflecting the fact they did not know how many candidates this election would have at the time of taking the poll.

Choice whether to run for Senate 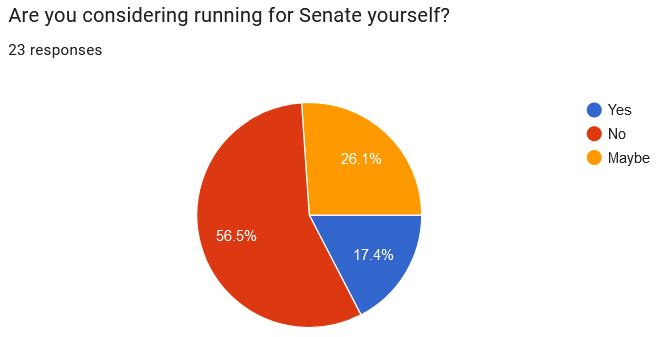 Regarding running in the upcoming Senate election

Just like in the midterm poll, the Senate does not receive majority approval on any of the issues they handled this term apart from the Treaty of Par Vollen with The Order of the Grey Wardens that came from the Executive.

On the Senate’s Level of Activity this Term

Only 3 respondents (13.3%) approve of the Senate’s level of activity, down from nearly 50% in the midterm poll. This Senate’s inactivity not only induced apathy from the citizens that did not take the poll but left most of those who did unsatisfied.

On the Senate’s Level of External Communication this Term

On the Senate’s Handling of Executive Oversight

Approval of this Senate’s handling of executive oversight is virtually unchanged since the midterm as the charts look nearly exactly the same. It seems that minister confirmation hearings had no impact on the public’s perception of oversight. The only commenter is unsatisfied with people trying to change the way oversight works.


All of the proposed "solutions" are really just looking for problems.
On the Senate’s Handling of the Region Administration Amendment

To be honest I have no idea what it's changing...
On the Senate’s Handling of the Criminal Code Clarification Amendment

To be honest I have no idea what it's changing...
Both the Region Administration Amendment and the Criminal Code Clarification Amendment leave people puzzled as to their purpose and receive the largest shares of “Neutral” respondents and those that “don’t know enough” to answer the question. However, the Region Administration Amendment is marginally better, suggesting that more people are aware what issue this amendment is trying to fix. Overall, though, it seems clear that the wider citizenry is not interested in amendments trying to fix small problems, especially if these amendments have been on the Senate floor for more than a term.

On the Senate’s Handling of the Frontier Act

The Frontier Act is the only piece of legislation that the Senate gets a higher approval on than in the midterm poll. That is perhaps explained by Peeps introducing a new version of the act, and one commenter praises the Senate for “moving forward towards passing something constructive.” However, the approval is still less than 50% as many respondents remain neutral.


Good that we are moving towards passing something constructive.

I like the frontier act, and the general consensus is that we’ll go frontier
On the Senate’s Handling of the Senate Protocol Act Amendments 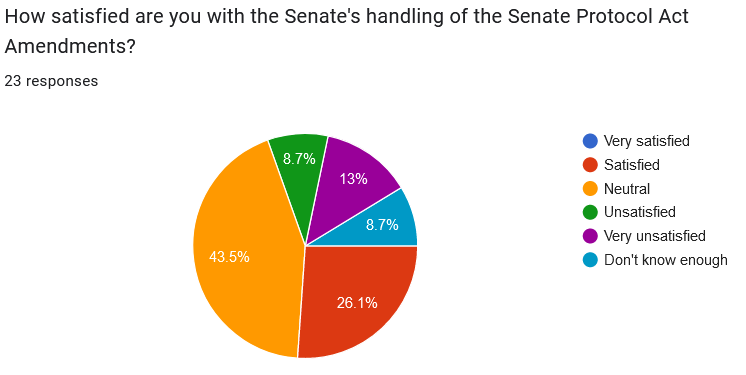 The Senate Protocol Act Amendments are similar to the Region Administration and Criminal Code Clarification amendments in that the majority are either neutral or “don’t know enough” to voice their opinion, one commenter admitting they “haven’t been following them.” It remains to be seen whether these amendments will be tabled, passed, or will drag on for another term.


I haven't been following them

The region appears divided on the discussion about reviving Arnhelm, started by Peeps. There are many neutral responses, perhaps because this is a discussion and not a ready piece of legislation yet. Quite a lot of respondents are unsatisfied, which may be because they do not agree with reviving Arnhelm at all. Still, a plurality is satisfied, and it will be interesting to see whether the next Senate will build on the satisfaction.


It's an okay idea as long as it's approached correctly

I like it! Most are in favour of it.
On the Senate’s Handling of the Treaty of Par Vollen: 78.3% Satisfied

The treaty of Par Vollen with The Order of the Grey Wardens passed “uneventfully” as one comment suggests - it did not even receive a Grand Hall thread. Most people were satisfied with the Senate’s handling of it, and the one person who was “unsatisfied” left a comment in which they criticised the lack of substantive questions as well as Gorundu’s “bizarre objection to a treaty with a military-only region.”


I was expecting this to be way more controversial, but I didn't really see many substantive questions except for Gorundu's bizarre objection to a treaty with a military-only region!

The treaty passed uneventfully, as expected
Click to expand...

In the final question, we asked whether people believe Senate substitutes should be able to vote, inspired by PhDre's idea that they should not. The result was a clear win for the status quo; however, due to the small sample size and the fact that the "No" option did get some votes, PhDre may yet be able to convince the majority.