Senator GraVandius in Jeopardy, Others Positioned to Stay

Senator GraVandius in Jeopardy, Others Positioned to Stay
53.8% Want Senator GraVandius Recalled
Written by Pland Adanna​
With every senator up for recall, the Europeian Broadcasting Corporation (EBC) conducted a poll about the upcoming referenda. The poll was open from May 1 to May 2 and received 26 responses, an increase of three responses from the last executive satisfaction poll in half the time. A majority of respondents (61.5%) said they were more interested in political gameplay than social gameplay, with many fewer interested in social gameplay (7.6%). A plurality of respondents (34.6%) have been in Europeia for five or more years, while another 38.4% have been here from one to five years, making the results disproportionately older. The remaining 26.9% have been here for less than a year. 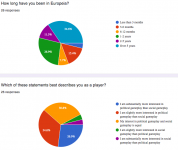 Senators Forilian, Malashaan, and Sanjurika are well-situated going into the recall, with 88.5%, 84.6%, and 92.3% of respondents, respectively, saying that they opposed removing the respective senator from their position. In Forilian’s referendum debate thread, the primary reason given by those who do not support recalling the speaker was that Forilian was the only senator to post in the time outlined in Lloenflys’s Grand Hall thread, the thread that started all of this. The main defense coming from Malashaan seems to be that he was working on the Information Reform Amendment behind the scenes throughout the period of inactivity. The senator with the most respondents willing to support is Sanjurika. Sanjurika is a first-term senator and, as discussed in his referendum debate thread, many expect a first-term senator to learn, implying that they would treat Sanjurika with more leniency because of this.

Senator GraVandius in a Tough Position

Senator GraVandius, however, appears to be in major trouble. A majority of respondents (53.8%) said that GraVandius should lose his Senate seat, compared to only 30.8% that said he should keep it. He has posted a response in the debate thread over his recall, citing his resignation as speaker and confidence in his activity for the remainder of the term. “If any of you in your infinite wisdom, determine that you know better than I do [about my activity] please, feel free to remove me from office," the senator wrote. "Indeed if you have the clear and omniscient premonition that I will be inactive the remainder of the term, absolutely remove me from office. It’s literally just my word versus your fortune telling abilities." Others who commented in GraVandius’s thread seem generally opposed to his removal but these poll results suggest that they are not in the majority.
Click to expand...

Cabinet
Citizen
Discord Moderator
Interesting to see these numbers. I'm not surprised that people are reluctant to openly voice their support for the removal of a senator, but I didn't expect such a discrepancy.

A quick and well-written article, nice job GC, Pland and all others involved in making this.

WA Delegate
Associate Justice
Citizen
I voted to retain GraV, but his response in the recall debate thread was less than professional, not a great look during a discussion to recall you. I wouldn't be surprised if that swayed voters more than his previous inactivity.

Prim said:
I voted to retain GraV, but his response in the recall debate thread was less than professional, not a great look during a discussion to recall you. I wouldn't be surprised if that swayed voters more than his previous inactivity.
Click to expand...

I ultimately voted to retain him, but that was only after re-reading the discussion thread and his address hyperlinked therein.

Prim said:
I voted to retain GraV, but his response in the recall debate thread was less than professional, not a great look during a discussion to recall you. I wouldn't be surprised if that swayed voters more than his previous inactivity.
Click to expand...

Agreed. I understand he is frustrated, but the lack of humility really might have led him to set his own trip wire here.

Citizen
Deputy Minister
by a margin of one vote, too, I can’t see why that post wouldn’t have been the nail in the coffin