Following a fiery start to the term with the appointment of the Intelligence Committee, where Senator McEntire lost his push for more transparency and his inclusion in the committee, the Senate has mostly cooled over in activity and debate. In fact, the thread, comprising of 73 posts, is about half of the total posts made in the Senate this term when it comes to substantial comments on legislative affairs. To better characterize the term, the Senate has so far dealt with three new legislative proposal, two administrative tasks, and confirmed two justices and acted on two treaty requests from the executive. They currently are also working on four proposals from last term.

Coming to the midterm, two Europeians took to the Grand Hall to announce their intention to file a referendum on two Senators they felt that didn't live up to their expectations. 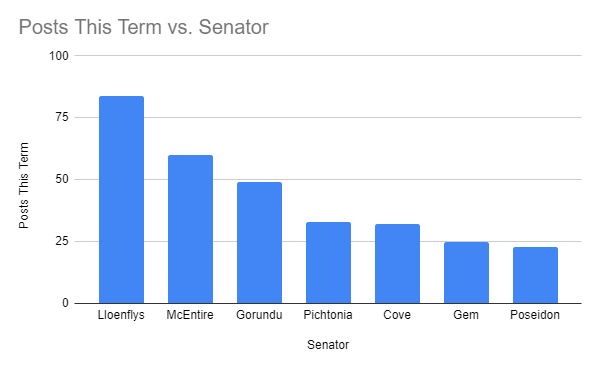 To note a few things: I intended for this graph to be a good visualizer of where each Senator fell in terms of posting. The quality of posts weren't assessed, and all posts were included, so administrative posts, votes, posts by senate substitutes were all included, which is why the Speaker may have an obvious lead.
Seva took to the Grand Hall first, criticizing Senator Gem's inactivity in failing to meet the five-day activity requirement for Senators. Seva criticized Gem for a lack of substantive posts, not appointing a substitute in light of his absence, and also accused them of abandoning their ministerial duties. Vice Chancellor Istillian quickly entered the thread to administer the referendum process, declaring that nine citizens had signed on, of the fifteen required citizens. Citizens such as Olde Delaware voiced a concern in their "silence" from World Assembly Affairs engagement on platforms, and Calvin Coolidge expressed a need to "hold elected official accountable". Senator Gem evidently took notice and spoke up in the thread, expressing their regret for failing to appoint a senatorial substitute, and promising that they felt it would be "very [feasible]" to complete their platform proposals in the remainder of the term. This seemed to be enough for Seva, and the rest of the region, as the referendum did not gather any additional signatures after his clarifying post.

Less than a week later, another citizen took to the Grand Hall, this time GraVandius setting the stage for a contential recall petition against Senator Poseidon. Senator Poseidon had already faced some controversy earlier this term, when they appointed a substitute for only their senate role, promising they could continue to serve in their ministerial position. GraVandius criticized this move in the referendum, along with attacking Poseidon's recent spam activity, despite being on a leave of absence from the Senate. Some citizens pointed out his original leave of absence explanation post, when Poseidon pointed to real-life factors that affected his Europeian activity, and other citizens seemed to echo the sentiment of giving the Senator some leniency when it came to contradictory activity. However, HEM stepped in, emphasizing the need for Poseidon to "consider the optics of major spamming while pressing pause on elected duties" and "weigh the interests of one Senator against the interests of the region having full, elected, representation in the Senate". His post led to a total of fifteen citizens signing the petition, triggering the referendum, including some citizens who were reluctant to sign at first. Similar to Gem, Poseidon took the time to explain their spam posts and delay in immediately returning to Senate work after the conclusion of their LOA, but ended up resigning, stating "I don't feel like people want me in the Senate anymore so I am just going to step away and make this easy".

The discussion didn't end following the resignation, however. Some citizens pointed in inconsistencies in the understanding of the timeline of events following Poseidon's LOA conclusion and returning to the Senate, Citizens such as PhDre chimed in, criticizing the "underlying attitude of the community regarding a player who has (reluctantly) publicly acknowledged they are going through a hard time, and that pressure was due to IC politcs". Other citizens such as GraVandius disagreed, arguing that it is "manifestly unfair" for a citizen to stay in a role that they aren't able to carry out. The thread finally seemed to conclude following a statement from HEM, the individual who had seemingly led to the signature threshold being met, reaffirming that "In [his] mind, two weeks 100% away from a role is too long".

Cabinet
Deputy Minister
Citizen
Excellent recap of recent events and it adds some additional information through the research you've conducted!

Deputy Minister
Citizen
Thanks! I’m sure we most of us remembered what happened, but I thought it might be helpful to document these things if we wanted to look back on them at the end of the year/EuroChoice

Senator
Citizen
I think it might be a good idea, with the post counts, to make a separate graph excluding the intelligence committee thread.

Gorundu said:
I think it might be a good idea, with the post counts, to make a separate graph excluding the intelligence committee thread.
Click to expand...

Might be helpful, but wanted to just make a simple visual aide to get this article out quickly. I wouldn't stop anyone from making their own though!

Gorundu said:
I think it might be a good idea, with the post counts, to make a separate graph excluding the intelligence committee thread.
Click to expand...

Henceforth, he shall walk.

Honoured Citizen
Citizen
I don't think the Intelligence stuff should be excluded. It's still part of the debate and business of the Senate. If it winds up being excluded, then one should also have a carve out to separate Lloenfly's posts in his capacity as Speaker moving things along (as monkey refers to them: administrative) and his substantive suggestions/comments, which I think is equally silly.