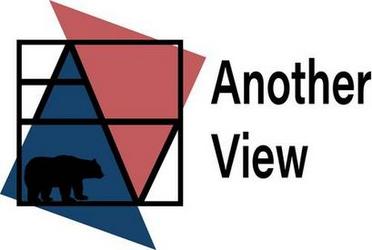 We're seeing a slight reversion to the mean for our age and join date demographics. The last Census in January 2021 showed a strong trend toward younger players, who made up almost 2/3rds of the respondents. As of July 2021, that number was cut back to about 57%, just over half of the region. The strongest group showing expansion was in the 3-4 year join date bracket. The IRL age of our region has largely remained the same, shifting only slightly toward older players.
---

Respondents showed a slightly stronger division of opinion, with both Forum Activity and Discord Activity increasing in respondents wanting focus. Notably, this is the highest support for "focus on discord activity" that we've seen over the course of the Census surveys. When seen in conjunction with the political versus social poll, the increase seen in political activity isn't fully realized in the increase in forum activity focus, perhaps indicating that discord activity is becoming slightly more accepted as a political activity or that more "social important" respondents are switching from an equal focus on forum and discord to a focus solely on discord. Either way, we're seeing an increase in support for discord activity being a focus while also seeing the region considering political activity as more important.
---

Rather small shifts here, the region seems relatively stable in its consideration of advancement and opportunity in the region. The small shift is toward respondents finding less opportunity and less pathway to advancement, slightly at odds with the more aged population, perhaps indicating some periods where safer, older players have been chosen for ministries as opposed to newer, riskier choices.
--- 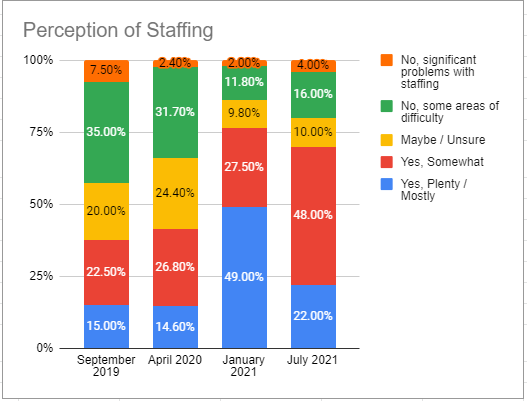 The staffing issues, which had almost completely ceased to be an issue in January 2021, seem to be returning slightly. While a strong majority of respondents still find that ministries are well-staffed, in the aggregate, that belief is much less strong, with a large shift from "Yes, Plenty" to "Yes, Somewhat". The softening of this belief in the strength of our ministries could be a sign of problems on the horizon. This sentiment may also be affected by acute problems in only a couple ministries, such as Justice and Culture, which have been in the spotlight recently. In either case, staffing may become a larger issue than for recent presidential administrations.


Service in Office and Voting

A slight decrease in each of these, likely showing that new players have not been finding their way into high office recently. Perhaps one of the downsides of the re-merge reform, new players are not being chosen to lead the region as quickly as they used to be able to move up to the First Minister position.
---

Service in other Office 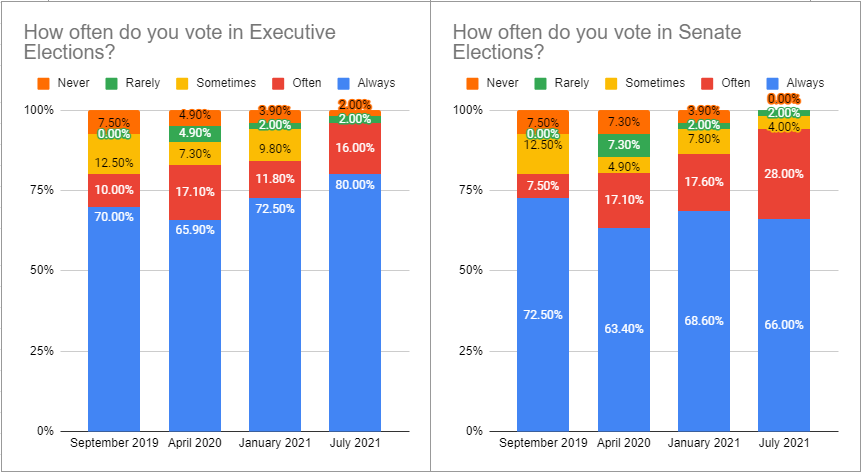 A strong increase in active voters in the region and almost unanimous among respondents. Where we used to have maybe 35-40 active voters in past elections in the past few years, we're seeing a strong and sustained base of active voters that is being reflected in these numbers.
-- More detailed voter participation data will be released soon. --
---

Service in Ministries and Councils

Polls showing a slight increase in service in ministries over time, especially in service in at least one ministry which is at a record high level at 84% of respondents. Domestic and Foreign Ministries are also still tracking very close together, with foreign ministries slightly edging out domestic ministries again, showing that the re-merge reform has likely created a better balance between the ministries, with respondents feeling that there is a good balance in priorities between domestic and foreign ministries.

The Senate's Primary Role in the Region

Get Out the Vote and Opt-Out Lists

A strong majority either support GOTV or have no opinion about it, with only 16% opposed to them. No respondents thought they should be banned. A majority support the GOTV Opt-Out list and the vast majority of those felt they should be handled by the Chancellery, just under 50%. Around 30% of respondents oppose the Opt-Out lists, but most of those felt that private groups could handle them if they wished. Not a discussion-ending response, but a significant showing for those who supported the Opt-out list through the Chancellery.
--- 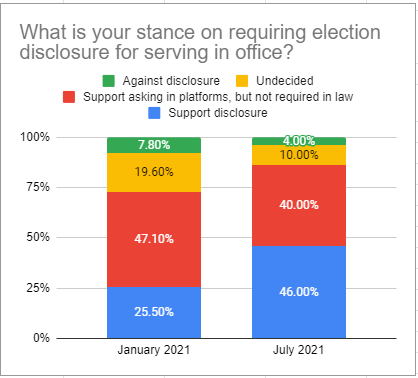 A strong shift toward supporting disclosure, especially in law, we may be seeing a tide turning toward those who support requiring foreign disclosures in law in the near future.
---

Arnhelm and the Citizens' Assembly 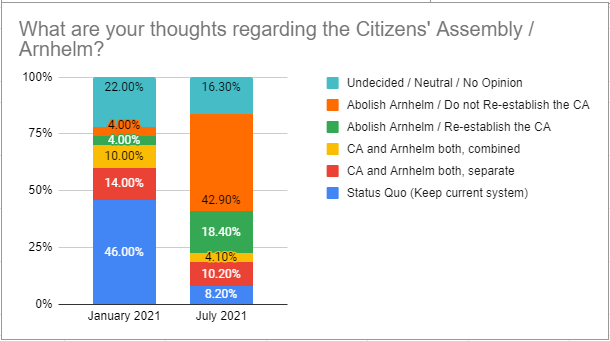 With the clearest shift between Census Surveys, the people have spoken on Arnhelm. Support for keeping Arnhelm in some form in January was around 70%, that total is now near 23%. Many of those respondents have shifted toward not having either the Citizens' Assembly or Arnhelm. Abolishment of Arnhelm now sits around 61% of the region, with 16% either undecided or neutral, who likely would not mind if Arnhelm were abolished. One surprising point is how strong the support was for having neither the CA nor Arnhelm, which may throw a wrench in the new discussion on the People's Assembly, a CA-like body. However, if the People's Assembly were significantly differentiated from the former Citizens' Assembly in form or function, those respondents may be more amenable to the People's Assembly proposal.
---

With very strong support for some kind of reform effort, it seems like the new People's Assembly discussion may just be the tip of the iceberg for desire in the region for some structural change. Most want to see this discussion take place with robust discussion and slowly over time, nothing immediate or not well thought out.
---

WA Delegate
Deputy Minister
Citizen
A great read. Thank you again for compiling all of this really interesting information!

Le Libertie said:
A great read. Thank you again for compiling all of this really interesting information!

Fixed above and reposted below for people who may have missed it the first time, sorry about that. I checked it over and still missed it.
I guess it's good to know someone was looking at the charts.

"The staffing issues, which had almost completely ceased to be an issue in January 2021, seem to be returning slightly. While a strong majority of respondents still find that ministries are well-staffed, in the aggregate, that belief is much less strong, with a large shift from "Yes, Plenty" to "Yes, Somewhat". The softening of this belief in the strength of our ministries could be a sign of problems on the horizon. This sentiment may also be affected by acute problems in only a couple ministries, such as Justice and Culture, which have been in the spotlight recently. In either case, staffing may become a larger issue than it has been for recent presidential administrations."
You must log in or register to reply here.
Share:
Facebook Twitter Reddit Pinterest Tumblr WhatsApp Email Share Link
Top